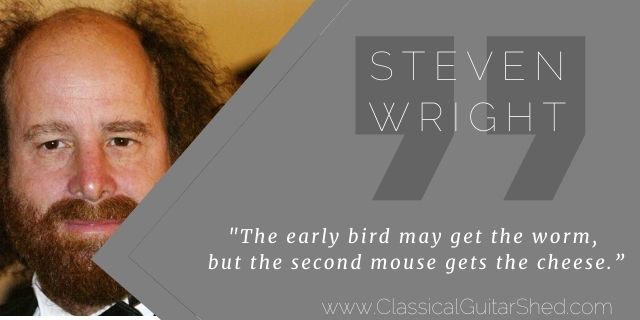 Steven Wright on Early Birds and Avoiding the Better Mousetrap

“The early bird may get the worm, but the second mouse gets the cheese”

There’s something to be said for jumping into new challenges, oblivious of the details. Depending on the job at hand, we may learn new skills faster this way. It’s exciting, and we feel the thrill of adventure.

Plus, in western culture, we love the brave explorers. We romanticize rushing headlong into new frontiers. We idolize the heroes who “wing it,” diving into danger without a second thought.

But this game carries risk. Many explorers die premature deaths.

Others make mistakes that could have been avoided with a little forethought. And others spend their lives chasing glory and never find it. They live frustrated and alone.

The second wave fares better. These adventurers maintain the joy of discovery. But they also learn from the successes and failures of their predecessors. They follow the trail.

Following those who came before, the proverbial wheel is already invented. These folks can put their energies to new problems and methods. They can build on what has already been tested.

It’s doubtful we would have SpaceX (Elon Musk’s rocket company) without NASA. And we wouldn’t have NASA without the brave amateurs around the world in the early 20th-century building model rockets and testing new fuels. Much of rocket technology was born in abandoned lots by enthusiastic hobbyists with day jobs and missing fingers.

On guitar, we have quieter pursuits. But nonetheless, we can choose whether to build on the past or reinvent the foundations.

“Guitar technique” is how we use our hands to create the sounds we want to hear. And many smart people have dedicated their lives to testing and refining methods by which we can play beautifully.

Any hobbyist guitarist can now benefit from the work of these musical frontiersmen. It may take more intention in the early stages. It’s tempting to rush in and follow what “feels natural.”

But once we ride the learning curve beyond the basics, we soar to new heights more easily.

Classical guitar is both a study and an exploration. We can stand on the shoulders of those who have already done the work. We can travel well-paved roads instead of bushwhacking cross-country.

And armed with formulas, methods, and movements we can trust, we can then discover the more hidden realms of music – the subtle shadings and turns that unlock emotion and paint pictures deep within us.

I just want to thank you for your lessons. You are helping us to understand how a piece is composed, the parts to analyze and how to do it. You are teaching a lot about how to read and play, and the most important part: PLAY with the music and ENJOY it.

Hello Allen,
I feel my guitar proficiency is improving considerably. Every day I’m exceedingly comfortable with my right hand technique and overall fluency. And my sight-reading has improved as well. Thank you for creating the Woodshed. It’s thoughtful construction and scope and sequence of knowledge and skills has advanced my guitar skills significantly. I can’t wait to see what the future holds. 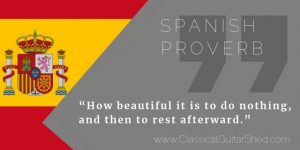 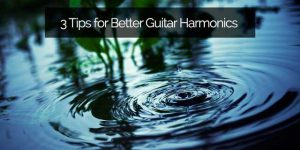 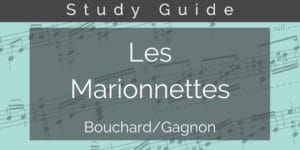 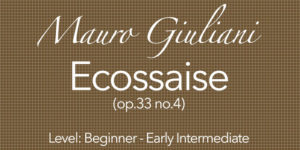