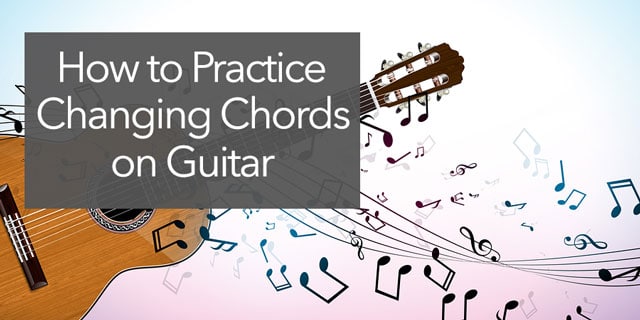 How to Practice Changing Chords on Guitar

Related: Why (and How to) Learn Classical Guitar Chords

Here’s the transcript for the Practicing Chords video:

Hey there, Allen Mathews here. I’ve got a little quick video for you, with a few tips on how to practice chords. Whenever we learn some new chords, be it our basic, I like to call them “cowboy chords”, c, g, d, e, a, a minor, all these types of chords, is an open positioning. I like to call them cowboy chords, it could be those, or it could be chords that come in your pieces, positions, things like that. Regardless of what they are, there are a few tips I’ve got for you here. On ways that you can practice them, so you can just get the more into your hand. Because ideally, we can change chords very quickly, very easily, very smoothly. So we can butt them up, right next to each other, and make it really smooth in our playing. So one of the things is, let’s just take a couple of basic chords. How about G and D. How about we just gonna start with G chord and the D chord. I like to play the G chord, with both the pinky and on the third frat right here. So you’re playing the G and the D on the second string. So with the G chord, here we are.

Now when we go into a D chord, we got a bunch a fingers to move. But the first thing that we can notice, is that one of the fingers stays the same, and that’s the third finger.  So we can use that, as kind of a pivot, an anchor in there, and move around it, at least mentally. So instead of lifting up everything, and then putting it back down. Then we can leave the third finger on there, and then just move the other fingers around it. So that’s the first step. Just look for a finger that stays on the same note, or at least on the same string. Sometime you’ll find chords that is just one finger, just happens to slide somewhere. Instead of actually lifting and moving, to a whole different string. It can slide. So first and foremost, know that, if it’s there. Now the second one is, if we wanna practice something, to play it really fast. One of the best things we can do, is actually slow it down and really look at the process, in slow motion time.  My teacher calls it plank time. I forget who the guy in Phillip plank, but he basically look splitting at the big ban, and splitting into little pieces that were each like a zillion of a second long. So basically it’s taking it in each little millisecond, look at it as its own little thing. So really slow it down and look.

And then back to the G, leading with the second finger. This is tricky for some people, because we get used to playing in a certain order. Whenever I play this chord, I go in this order, 1, 2, 3, or whatever it is.  So what this does, is changes the order that you’re actually playing your fingers down. That teaches them to move independently, whenever you put it back into time. It all goes faster. It doesn’t mean you have to do this way all the time. It’s just a practice technique, to get everything faster. Then whenever you do go back, it will just move where it’s going faster. So then we’ll do it with the first finger. We would say okay, the first finger is going from the second fret on 5th string, 2 strings over to the second fret on the third string, and that’s its motion. So it’s basically skipping a string, staying on the same fret, and that’s what that has to do. So now we change from G to D, leading with the first finger first. That and then go that. Now you’re having to put your chords down, using the first finger as the first note that hits.   And you can do it with the first finger, which in this case happens to stay the same. So that’s just a couple of techniques that you can do. You can do this with any chords, any combinations of chords. I do recommend that, when you’re learning new chords, that you take it and just pair it up, with one other chord, and practice back and forth. This case we did G and D, back and forth.

Then if you have a whole string of chords that you need to do. Say there’s a song, rapid fires a succession of chords. Instead of practicing the whole thing, take just the first 2 chords, then the second and third chords. Then the third and fourth, and the fourth and fifth, and then put them together in little groups of 3. So really take it apart. Instead of just over, and over, playing chords back and forth, as fast as you can. Instead of just kind of beating it to death, in that way. Take a step back, look at the way that you’re practicing, kind of analyze. Maybe there’s some better way I can do, and then you’re actually practicing. Practicing remember, is solving problems. If we’re not solving problems in our practice, we’re not making the most of our time. So if the problems are still there, at the end of our practice. We haven’t actually gotten closer to them, to solving the problems, then we’re not practicing efficiently. We could be making better us of our time. So just keep an eye on that in our practice, and ask yourself that question. Am I solving the problem? If I’m not, then do something differently, cause whatever you’re doing is not working. If your problems aren’t solving, then you’re not doing the right thing. You should take a step back, and do something different.  Alright, that is chords. Practice them well, practice them slowly, and then speed them up. I hope you have a wonderful practice. Be well.