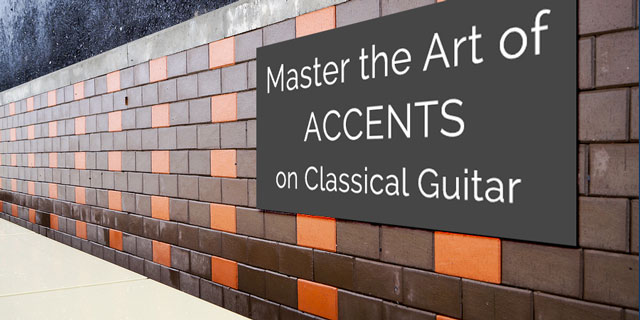 How to Play (and Practice) Accents on Classical Guitar

Every day, we emphasize certain points when talking to each other. We bring attention to specific points so that we communicate more clearly.

In music, we do the same. We can bring attention to certain notes so we better communicate our musical ideas.

Sometimes, the composer tells us when to emphasize something. Other times we choose based on our understanding of the music.

Either way, accents are a wonderful way to add beauty and organization to our music.

What is an Accent?

An accent is an emphasis on a certain note.

Any time a note stands out from the note around it (intentionally or not!), we can think of it as accented.

When used well, we can make our music interesting, compelling, and even emotionally poignant.

The most common accent symbol

Certain styles and genres often have recognizable patterns of accents that form the “flavor” of the music. For instance, a waltz and a polka may look similar on the page. But through the implied accents they become their respective styles.

However, when we allow notes to “pop out” unintentionally, we undermine the musical structure. Listeners may become confused or disinterested.

The Most Common Accent: Play the Note Louder

The most common form of accenting a note is to play that note louder than the notes around it.

When we see the accent sign in our music, this is generally what we should do.

By the same token, we can “pull back”, or become more quiet to bring attention to a note or passage.

We very often do this in speech. It prompts the listener to “lean in” and pay close attention.

Other Ways to Accent

Any note that draws attention to itself There are other ways to emphasize notes than simply the volume (dynamics).

There are many different ways to accent a given note.

We can also accent a note by changing the tone quality.

Assume we have been playing in a very bright, metallic tone quality. We can create contrast by switching to a very warm tone quality.

Use Rhythm and Duration

The most common rhythmic accent is the “staccato” note, played very short and clipped. This is notated by a dot over or under the note head.

Another form of accent is called an “agogic” accent. This form of accent uses rhythm and the duration of the note to separate it from the notes around it.

Advanced tip: to make your rhythm more compelling, make a slight pause (stop the previous note) before tied notes or syncopations. Then play the tied or syncopated note a split-second late. This creates an agogic accent that creates interest and moves the music forward.

Composers will often use note choice to bring attention to a specific note. Any “surprise” note is accented by virtue of its difference than the notes around it.  It could also be higher than the other notes.

This can be a note in the melody, or it can be an unexpected harmony (chord).

Related: How to Balance One Note Louder in a Chord

In sheet music, these will usually be notated precisely, either with the notes written out, or using a specific symbol.

However, in some music traditions (such as baroque) or instruments (such as harpsichord, which only has one volume), players would use ornaments to direct attention and create drama.

Lastly, if subtlety is not your thing, you can effectively accent a note using the following method:

Very effective, if a bit heavy-handed.

The Secret to Good Accents (How to Play Accents on Guitar)

When we see an accent in our music, we could simply play that note louder.

However, if we are already playing loudly, the accent won’t stand out so much.

This takes some planning and strategy, but it creates a much more convincing effect. It also makes the music seem simpler to understand for listeners.

The Accent Trap: The Note Following an Accent

The most dangerous note (license to kill) is the one directly following an accent.

Create contrast between the accented note and the note just after the accent.

It’s very easy to allow the energy (muscle tension, momentum, finger velocity) of the accented note to carry over into the next note.

However, this ruins the effect of the accent. The accent is by definition different from the notes around it. So we weaken our accents by homogenizing them with the surrounding notes.

So in our pieces, we need to pay close attention and avoid this trap.

We can practice accents as an exercise unto themselves. Using a single open string, we can work on the contrast of one note to the next.

Any scale, arpeggio, or other technical practice will also benefit from adding intentional accents. We usually choose a set pattern (i.e. accent every 4th note) and strive to play consistently in that pattern.

As always, go slow enough to maintain attention. And exaggerate the contrast between accented and unaccented notes.

One way to make everything you play more beautiful is to avoid accenting any note that is higher than both the note before and after it.

Accenting a high note creates an “arrival”, which stops the forward momentum of the musical line.

Unfortunately, high notes on guitar “want” to pop out. It takes extra attention and control to subdue them. So you’ll often hear players at every level unintentionally accenting high notes.

Start Simple, and Get Into Practice

Eventually, you’ll be able to control each and every note you play. You’ll be in complete charge of the volume, the tone, everything.

One way to build your skills to that point is by practicing accents.

With all the variations and tips above, you may be tempted into the “plume of complexity”. Instead, just choose a simple exercise and work it into your daily practice.

There will be time for more complex practice later, if need be.

“The basics are the basics, and you can’t beat the basics.” 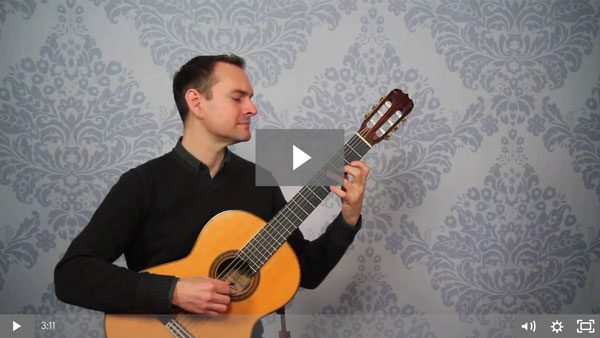 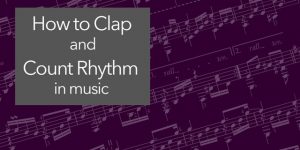 Clap and Count Rhythm Aloud: How to Learn the Rhythms in Your Music 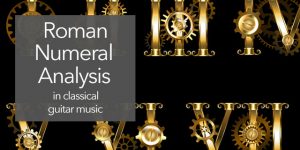 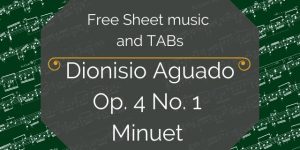 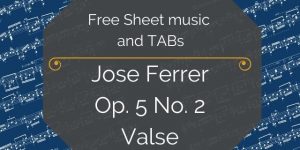